Malaysian Islamic Banking industry is undergoing a massive structural change. I was a bit surprised when we had visits from several research institutions asking Islamic Bankers on opinions on how to make Islamic Banking in Malaysia more “Islamic”. From those discussions, I got the impression that the Central Banks is really pushing the Islamic Banking agenda, which will be a quantum jump away from the current model of “replicating” the conventional cousin’s model. This quantum leap also means that the model that Central Bank envisioned will be substantially different to the Islamic Banking model practised in the major geographies in the Middle East.

What we practitioners picked up in the discussions were the persistent questions of:

This line of question leads to the impression that the standard banking model should be evolved into a more “Islamic” structure of risk-taking, profit-sharing, venture-financing and cleaner utilisation of customer investments and funds. This is a clear departure from the traditional way a bank is set-up, whether pure Islamic Bank or Islamic-windows operation. The only response we can give was: The above products requires a different view on risk-taking and credit, and moves closer to the model of venture-capitalist and development banks. Traditional bankers will not be able to assess the risks on such products, and shareholders will be open to a higher risk-profile to demand a higher return on their funds.

This envisioned model will be something not entirely new. There are already working models, but generally the stakeholders, including the customers, MUST understand (and accept) the concept the risk vs return pay-off of such model.  Something very similar to the risk-taking vision of Islamic financing is Venture Capitalism (although many shudder to the word “capitalism”).

Venture capitalist works on the ratio that in 100 customers, maybe 5 or 10 customers are able to survive their start-up period and have decent returns, and the returns to the venture capitalist is sufficient to cover the losses incurred from the remaining customers. The risks of losing the capital is high, and in the cases of Development Banks, government backing usually covers for loss-making enterprises, so long as it serves a purpose toward the national agenda. But this is the essence of risk-taking, and its corresponding rewards. If Islamic Banking want to expand, the thinking must therefore be expanded into this space, i.e. the realm of Mudharabah financing. 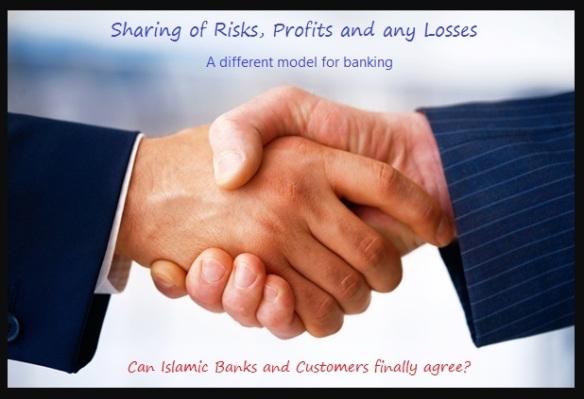 Other models includes a co-operative model where typically a group of “investors” enter into a collective and co-operative agreement to embark on an entrepreneurial endeavor. The money is pooled to create capital and business is run by the “elected committee” and performance is reported regularly to all stakeholders. Profits are shared according to agreed payout ratios or to be re-invested into the business; losses are borne according to equity of each investor.  And the manager of the business earns a management fee. This is a typical Musyarakah arrangement.

Such models can be easily formalized under Islamic Banking, but we realized the fact that there is a huge monster in the shadows, ready to pounce on efforts to grow the Islamic Banking envisioned by the Central Bank that falls along this route.

Developing the Islamic Banking in its present form of replication and innovation alongside the huge monster of Conventional Banking has already proved to be a challenging task. Developing a truly “Islamic” Islamic Banking will pose an even greater challenge. Can Islamic Banks afford another gestation period of regulatory upheaval, customer re-education, corporate buy-in, legal re-thinking and more importantly the impatience of shareholder dollars while the kinks of the new model are being smoothened out? Can we afford to fall further behind while we get our new act together? The so-called great momentum of Islamic Banking growth will be lost, and at a risk of losing even further ground as Conventional Banking takes up the slack left opened by Islamic Banking. It is hard to win back customers, if customers’ confidence in the model is no longer there (albeit temporary). To switch to a different banking model, no matter how noble the intention, will put the Islamic Banks right to the sword. It will be “make or break” for all.

We will go up against a huge giant which will only get stronger with this. Political-will can help, together with strong regulatory push for industry survival. But the next question to be asked is that, will the market itself be ready for such a shift in thinking? Can they accept that a Bank is no longer a Bank, but instead a partner in their businesses? Do they even want Banks to partner them? Are they willing to share the risks, and therefore the equivalent returns with the Banks? If today they are paying a cost of capital financing at about 7.00% per annum, and earning a net margin on their business at about 15% per annum, under the regime of profit sharing at 70%:30%, are they willing to share their net margin of about 10.50% with the Bank? Alternatively, will the Bank be willing to take the risk of sharing profits if the returns are lesser than 7.00%? What about loss making endeavours? Will only riskier businesses be interested in such models, since presumably such business will not have been able to obtain funding coming from the “conventional” credit assessments? It will be a scenario where the Islamic Banks will “share risks” if it is a high risk customer, and conventional Banks will “transfer all risk” to its low-medium risk customers they onboard.

It will be interesting to finally see the Central Bank’s plans for the future. I am sure there is something in the works, especially after we just had a third research team ask us the same, same question again. “What are the things holding back the Bank from introducing these types of “Islamic” Islamic products?”. The one answer that crops up in my mind.

“That huge, rich monster standing right next to us. Ready to pounce.”