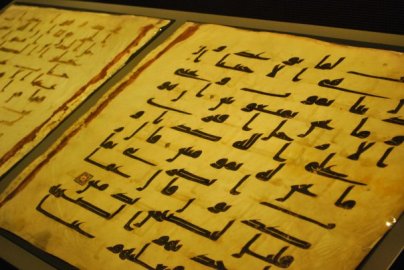 One of the things that attract me to maintain this website on Islamic Banking is the opportunity to interact and share ideas with the various practitioners and academicians in the industry. There are many discussion topics and we intend to bring such discussions to the open table as constructive as possible. Interaction with Ms Rosana is always interesting as she dare explore the Islamic Banking model itself, making comparison to other similar models in the market across geographies. And I do share some of her views on the industry, and I have written about it to some extend in my earlier postings. What is interesting about Ms Rosana is that she is taking the discussion a necessary step further in evaluating the existing Banking model, as to whether it is the right model to begin with. She has written a short discourse on this topic and looking to explore in-depth its implication in the near future.

She welcomes constructive feedback, comment and discussion points for this posting and hopes to decide on the next step forward gauging from your kind response. Do read and give us your opinion and comments. Thank you.

Is Islamic Finance Suffering from the Wrong Model of Implementation?

In this blog’s latest post ‘Disruption: Islamic contracts’, there holds an imminent danger. The Islamic banks in Malaysia are not so much inching towards becoming just like the interest-based conventional banks they were supposed to replace but in fact, running towards them. Even as the industry celebrates its trillion size assets and formerly astronomical growth, there lies a darker truth. In a recent class I taught on the dichotomy between Islamic banking theory and practice, a participant, a new ‘Islamic’ banker, came up to me and wanted to discuss commodity murabaha. She said her team had just tabled the product for the bank’s approval but she did not feel comfortable. The head of the Shariah committee also seemed disappointed. His comment, according to her, was that we no longer need Shariah advisers. The industry only needs commodity murabaha experts now.

Post-IFSA 2013 which fines and jails CEOs and everyone above and below for any wrongdoing and a flurry of policy documents telling banks how to implement Shariah contracts, ‘Islamic’ banks in Malaysia are seeking refuge in tawarruq. Musharakah and mudarabah? All that is left of profit and loss sharing contracts, which some scholars say are at the heart of the ideal Islamic financial system, is the policy documents by Bank Negara Malaysia (BNM). I would be pleasantly surprised if anyone can show me a bank which is genuinely implementing them. The supposed mudarabah-based products brought on by IFSA, namely the investment accounts and the IA platform, are currently being mutilated to look almost like any guaranteed and fixed return deposit. The IAP, I believe, are unlikely to be successful for laughable reasons.

When commercial banking, with its inherent tendencies for excesses, profit maximisation and desensitisation to social welfare, is the problem, how does crowdfunding through commercial banks become the solution? Won’t the banks still look for credit-worthy companies with an almost guaranteed future to fund? Who then takes care of the small and medium-sized entrepreneurs who are also seeking financing? Are not the SMEs the backbones of the economy? Not to mention, where is the upholding of Islamic values such as justice, equitability and social well-being? Granted there are other organisations in Malaysia meant to help the lower incomes and SMEs but why do ‘Islamic’ banks call themselves ‘Islamic’ if they are far from embodying the ideal values in Shariah? Unfortunately, this sad state of affairs extends to other parts of Islamic finance such as takaful (apparently ‘Islamic’ insurance), sukuk, the other beauty pageant contestant in this parade, and other capital market products such as interest rate, oh wait, ‘profit’ rate swaps.

How did BNM envision the success of IFSA with no changes to the current environment? We are still in a dual system where ‘Islamic’ banks are pitted head-to-head against interest-based conventional banks. ‘Islamic’ assets are still only a quarter of the entire system despite the country allowing all sorts of controversial contracts such as bai al dayn, bai al inah and the one that takes the cake, tawarruq. Where are the educational campaigns to explain to customers this shift in the industry that the central bank expects to happen?

When customers, including ‘Muslims’, have been accustomed to deposit guarantees and fixed returns their whole lives, how do banks suddenly sell them an ‘investment account’ that promises neither? Is it any surprise that conventional bankers are using this as a selling point? They are telling customers to avoid ‘Islamic’ products because there are no guarantees. Theirs still do. When the chiefs of ‘Islamic’ banks themselves seem cloudy in their understanding of the new regulations, how did BNM envision people on the street, who are banking with its ‘Islamic’ banks, to embrace the changes? A deputy director unfortunately got defensive when I asked. Other central bankers claimed ignorance because they “are not from that department”.

While BNM seems keen to reform the industry, perhaps the answer it has been looking for is that the Islamic finance industry, and within it, Islamic banking, has been built the wrong way. Trying to make it work in the commercial banking space is what has led to the frequent comment that it is like squeezing a square peg into a round hole. Commercial banking, with its profit maximisation mantra and desensitisation to social welfare, is antithetical to the Shariah ideals of justice, equitability and social well-being as embodied in the maqasid. And isn’t it the one that has been leading the world from one crisis to another? Why then are we so busy emulating them? Isn’t it time the powers that be wake up and face facts?

So why did all the big organisations in Islamic finance, from the global standard-setters such as AAOIFI and IFSB to each country’s central banks and each ‘Islamic’ banks’ Shariah committees condone these practices? Perhaps because they were the easiest thing to do and allows for a fast build if the intention is to grab fame and fortune through one’s achievements in Islamic finance. The countless Islamic finance awards and conferences and the effusive back slapping there are testaments to this. Bankers are such happy people.

So what is the solution? I believe it is cooperative banking. The true, genuine type practiced in Europe and not the ones in Muslim countries because they are largely used to fund political cronies and thus suffer from questionable management and corruption. My next article will thus explain cooperative banking, how the model works and why they are a better fit for Islamic finance than the current commercial banking model. In the meantime, I look forward to your thoughts. Students of Islamic finance intuitively get it when I explain these arguments while some practitioners acquiesce (quietly agree). Another group reminds me of this statement in a book by Upton Sinclair, who ironically was also an investigative journalist (uncovers scandals and corruption) as I was in my former life and whose solution to the 1930s Depression in California is to create cooperative ventures for the unemployed. The idea, to his surprise, received wide support but his bid to run as governor was waylaid, according to him, by the oppositions’ “dirty tricks”. He wrote this statement in his book about the political adventure, “It is difficult to get a man to understand something, when his salary depends on his not understanding it.” The reaction of the other group of bankers brings to mind this quote.

What do you think about her assessment and commentary on the Islamic Banking model? Do give us your feedback in the comment box. Thank you.

Check out her other contributions in the following page : Writings Rozana Gulzar Mohd

In one of my engagements a couple of years ago,  I had the fortune to present my views on the Islamic Banking industry and its challenges in front of an audience in INCEIF. One of the bright participants there had subsequently proceeded to complete her MSc Research and recently gotten in touch with me. I had a read of what she had published, and it is a remarkable piece of academia. I have since asked for her permission to publish it on this site, for the benefits of other readers. Good food for thought.

Thank you Ms Rosana Gulzar Mohd, for your allowance to this request.

Overall, I find the research quite enlightening and overall accurate. It is also a good reminder of what we still need to achieve to ensure Islamic Banking remains focused and strong for the foreseeable future. Happy reading and do give your constructive feedback on the paper for our discussion.

Note : Ms Rosana was a student from INCEIF : The Global University of Islamic Finance and recently finished her MSc thesis concluding that a) Islamic banks are not really ‘Islamic’ and b) the recommendations for reforms. The analysis centres on the industry in Malaysia. She is keen to pursue her PhD. (Click this link for alternate site to download research) 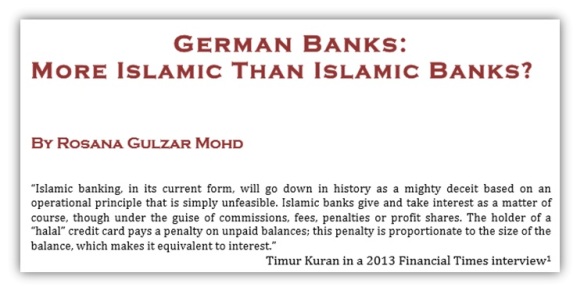 German banks: More Islamic than Islamic banks? by Rosana Gulzar Mohd
Middle East Institute – National University of Singapore
Abstract:
This study, which compares the German system with Malaysia in the hope of improving Islamic finance, uncovers four paradoxes. Germany is chosen because its focus on mutuality and small enterprises, at the expense of profit maximisation, not only embodies the Shariah principles of justice and social welfare but also makes the system more stable. The banks’ profitability and stability between 2006 and 2014 are compared. This covers their performances before, during and after the global financial crisis. The indicators used are the banks’ return on average equity (ROAE), return on average asset (ROAA) and net loan to deposits and short-term funding. While this study finds that Malaysian banks, including Islamic ones, are indeed significantly more profitable and efficient than German banks, it uncovers four paradoxes. Firstly, it is ironical that Malaysian commercial banks are less aggressive than the Germans in their loans-to-deposit ratio. Secondly, the profitability of Malaysian development financial institutions (DFIs) and banking cooperatives are comparable, if not higher, than its commercial banks. Thirdly, the ROAE for Malaysian banking cooperatives rose 41% during the 2008 crisis when other banks’ fell. The last paradox is that while Malaysian commercial banks seem prudent in their lending, the DFIs and banking cooperatives are leveraged to an alarming extent. This study concludes with two reform recommendations: a rethink of the economic drivers in Malaysia and a sprucing up of the DFIs and cooperatives’ balance sheets towards national standards.