Forward dealing transaction has always been a difficult proposition for Islamic Banking as most of the attributes in dealing in future dates contradicts the Islamic Banking requirements of certainty and transparency. Of course there are contracts that caters for future transactions such as the Bai Salam and Istisna’a, but those never really took off in a big way due to the restrictive conditions imposed for such contracts.

Why the need to deal in future contracts?

Islamic Banking is a big believer in being above the board and any contracts that deals with speculation (gharar) and gambling (maisir), are deemed as “prohibited” and this includes “forward. For instance, the conventional forward contract where both payment and delivery is made at a future date is deemed un-Islamic, as the transaction is agreed and binding whereas both payment and delivery remains uncertain. The conventional “deferred contract” therefore carries the potential losses to one party.

But the need to develop a “forward-based” structure remains one of the needs of the consumer. When a customer intends to secure a future transaction, where a large chunk of details remains ambiguous, Islamic scholars came together to look the the parameters for such transaction. Over a period of time, the parameters of a future contract was defined by the scholars, and strict adherence to these rules are mandatory. 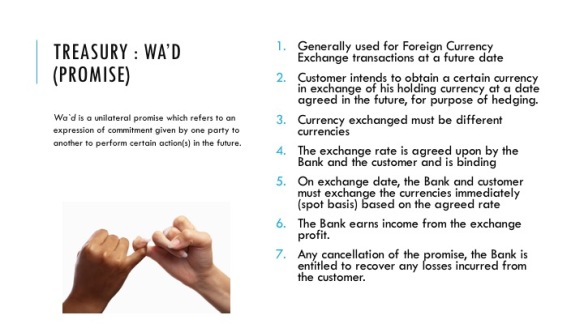 Forward dealing contract therefore will remain important as the market nowadays deals with a huge volume of uncertainties at the speed of light. A contract that allows for such flexibility is key in capturing such opportunities, so long as the principles of Shariah are not breached.

There are several contracts that create deferred obligations that are permissable in Islamic Banking. The ones that are commonly used are:

All the three contracts above involves “bi-lateral” binding contracts, such as the Arbun where the deposit is forfieted should the contract is breached.

With Wa’ad, the rules are less stringent as it is a “Promise” thus is non-binding. It is also unilateral therefore both parties can choose not to make good their promise. Under Shariah, because of the unilateral nature of the promise, the details of the promise is not as carved in stone as any other contract. Those restrictions do not apply to the contract of Wa’ad, where in other contracts the details such as time of delivery, the price, terms of payment and goods specific description are strictly adhered to. 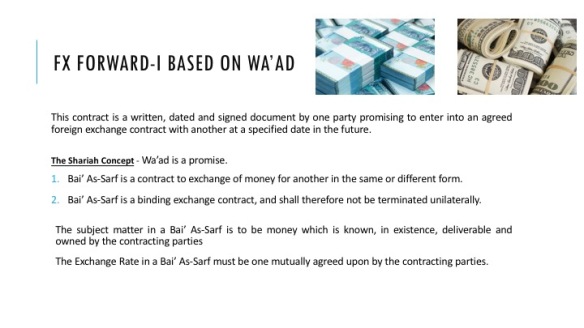 And because of its flexibility, the Wa’ad is now being noticed as a key alternative to structuring a lot of substitute products of a conventional bank. It is expected that the contract will grow more prominent in the next few years as demand for easy and flexible products increased. We have already seen its usage in some Foreign Exchange swaps, and is getting prominently noticed in products dealing in future contracts. 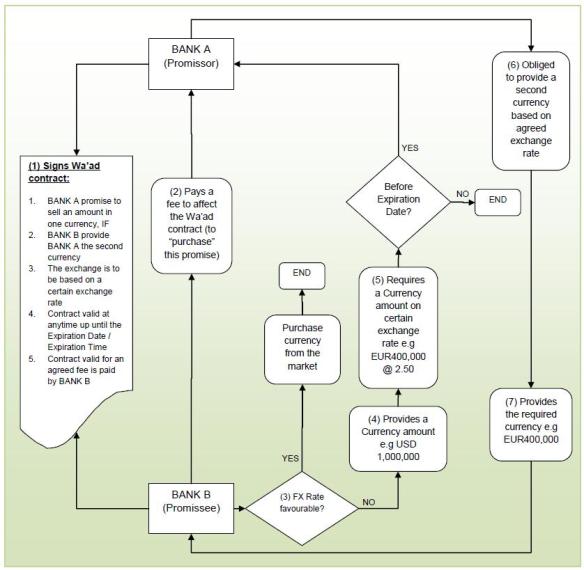 In general, Wa’ad is now widely used to cater for products such as the Foreign Exchange Forward contract, where the customer is seeking to secure the FX rates for a future transaction (Bai Al Sarf). The basic requirements for the validity of Wa’ad are as follows: 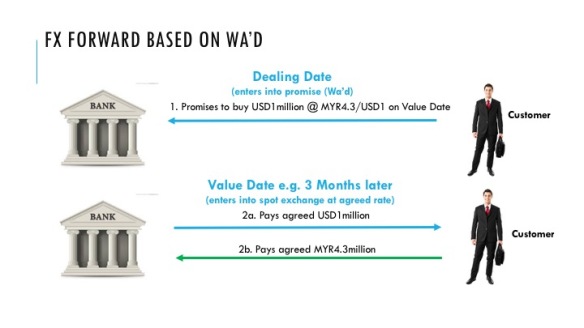 As with every newly explored Islamic contracts, there have been very few test cases which puts the contract under scrutiny. Before structuring such products under the contract of Wa’ad, the following must be remembered: